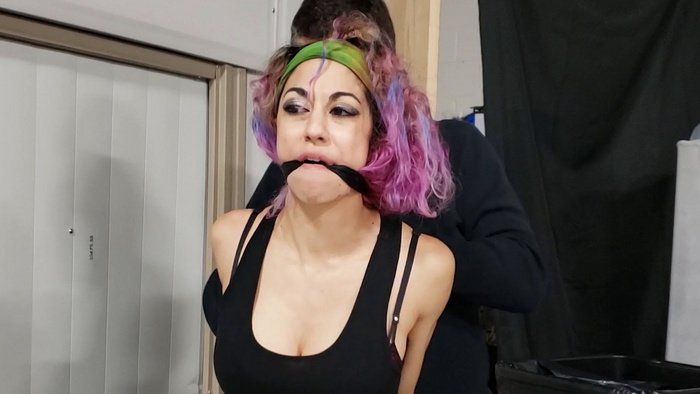 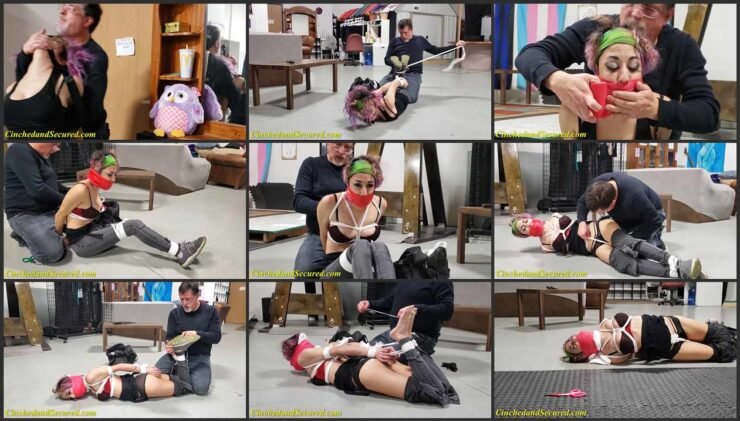 Simone thought her new job as a security guard at an old warehouse would be a piece of cake. At least, she thought so until she heard a strange noise and found herself jumped, cleave gagged and bound with wrists behind her back by an intruder! The feisty girl was not about to go down without a fight, however, and she stomped on the burglar’s foot and made a run for it! She nearly made it, but found it too difficult to open the door to safety with her wrists bound, and she was roughly dragged back into the center of the warehouse, forced down on her stomach, and subjected to the indignity of being tightly bound. She constantly belittled the burglar through her gag until he had enough of her big mouth, applying a very tight wrap gag, pulling the vet wrap tightly with each pass around her face! That was nowhere near good enough to suit the intruder, so he began wrapping her mouth again, applying tight red electrical tape over the already stifling gag! Now, her bitchy comments reduced to muffled, panicked grunts, she felt her top being cut off as her elbows were wrenched together and bound behind her! Her arms were on fire now, the stringent bondage causing her chest to thrust out, her huge tits straining against her bra. The creep wasn’t finished with her yet! He bound her ankles and legs, then yanked her jeans down to expose her sexy panties, adding a tight crotch rope sunk deep into her most intimate of places! Now he went to work on her gagged mouth again, pulling a cloth over her face until it was tight as the skin on a drum, causing her face to disappear until only a tight band of cloth was visible from nose to chin! She sobbed as more of the medical bandage was wrapped over THAT, sealing her mouth until four layers of gagging material and ensuring she’s NEVER be able to call for help! Finally, he pulled her into a horrendous hogtie, taunting her by tossing a pair of scissors a few feet from her and leaving her alone! Desperately, she squirmed and thrashed, slowly inch-working her way to the scissors, her only chance of escape. When she finally managed to reach them and get them into her scrabbling fingers, she discovered the bastard had taped the blades shut! Now, completely helpless, alone, scared and humiliated, the buxom beauty could only make her way around the floor of the warehouse, slowly and painfully, a prisoner of her bondage, in the hopes that help would arrive!