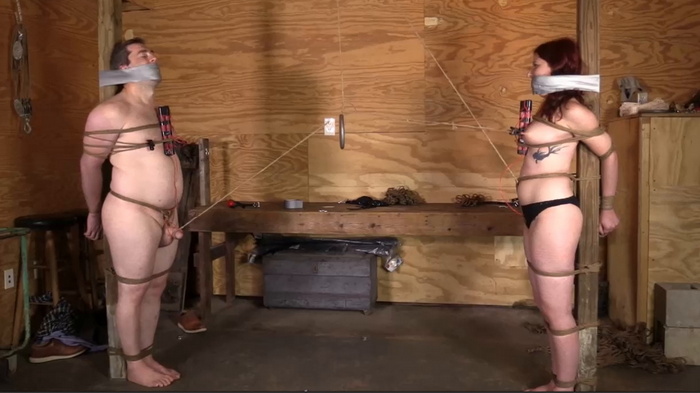 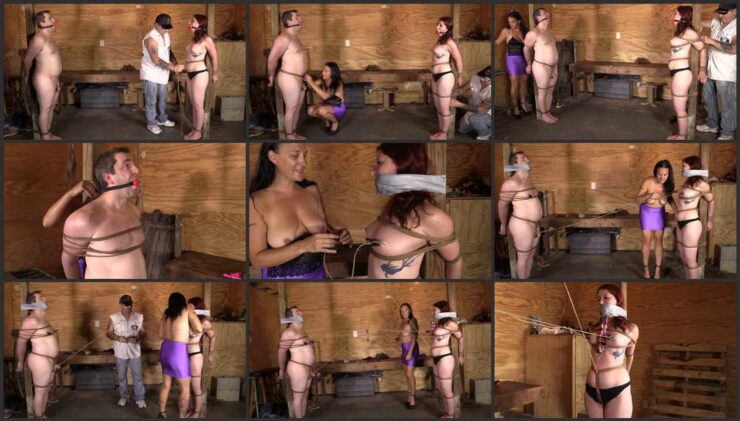 The two of them are shown hopping into the picture and XXXX to stand against the two poles. Their arms are untied and pulled back behind the poles. You and Les retie their arms at the wrists, below elbows, above elbows. Rope is wound around their necks and the poles. Rope is tied at waist, at knees and ankles to hold them to the poles. Finally you remove their ball gags. The man pleads to let his wife go but Brenda laughs as she crams her own panties in his mouth and starts winding gray duct tape around his head.( about six or seven times making sure it is tight) Brenda runs her hands up and down his body and even plays with his dick. Les has removed the Gmoras ball gag and he crams her panties in her mouth and winds the gray duct tape over her mouth as well. He feels up her breasts as he walks away.

Brenda is in charge now. She ties rope around the man’s dick while playing with it. Then she goes over and puts nipple clamps on Gmoras’s breasts while pulling her breasts out and rubbing hers against Gmoras. She goes over and places nipple clamps on the man as well. “Now here is what we did to them.” Les returns with a smaller type of rope. He attaches some to the nipple clamps of Gmoras and then Brenda does the other end to the man’s dick. Both of them scream in pain as it hurts. Brenda and Les walk away for a little bit letting the two P.I.’s suffer. Finally they come back, remove the rope from the two sensitive areas. Brenda leaves the nipple clamps on. Les is tying another rope to the crotch of Gmoras. He runs it over to the middle and over a pulley.

Brenda brings over two rolled up sticks of dynamite. She ties them to the man’s chest and runs a wire up under the ropes around his chest. Then she does the same with Gmoras placing the bomb between her breasts and running the wire under her chest ropes. Les now puts a weight on the pulley and pulls it taut. He goes over and does the same with the man adding another weight to the end of it as he runs it over the pulley as well. Now both P.I’s have a weight to hold up with their crotches. “OK, folks, this is what happened to the ones you are looking for. As for you two snoops, the wires are sensitive to wetness. So if you sweat at all the water hits the wires you will go BOOM!! You will have to keep the weight up as well. We are going to leave now and will be turning the air conditioner of to save money. Don’t worry we will be back sometime in the next three weeks. So I wouldn’t sweat or get wet in any way or else you will go BOOM like the others did.” The video ends with the two struggling against the poles. And you can start to see a little bit of perspiration appearing on their faces as they panic against the odds of surviving.