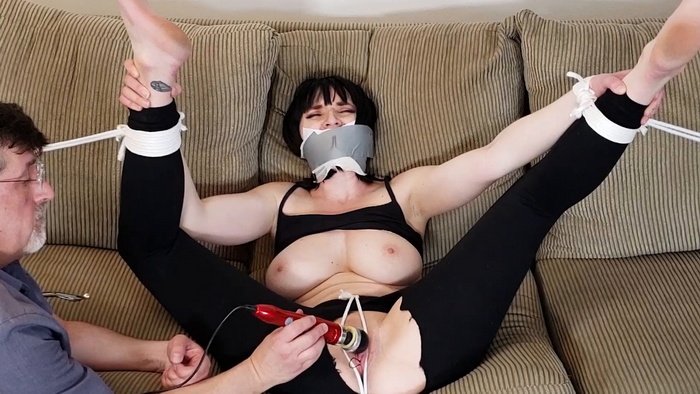 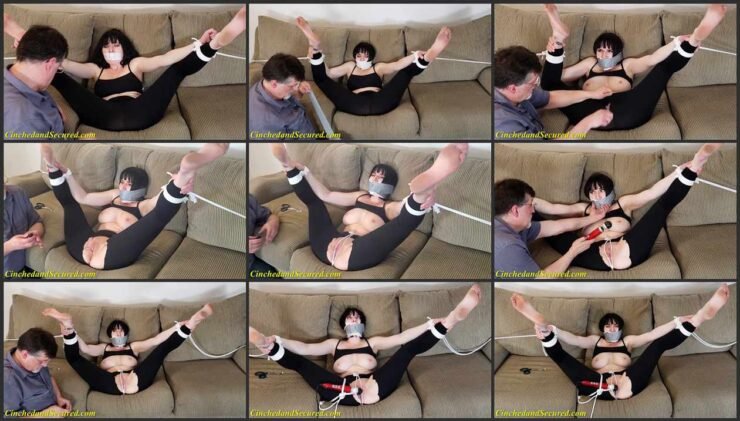 Dahlia was home alone relaxing after a long walk and a shower, laying on her couch wearing only her sports bra and tight black leggings. Her peaceful reverie was shattered when an arm wrapped around her body and a strong hand clamped over her face, cutting off her cries before they could even leave her mouth! Before she knew what had happened, she was bound with her hands locked to her ankles and her legs spread open VERY wide, leaving her completely vulnerable to whatever plans her assailant had! Soon he appeared again, stuffing her mouth full and sealing it shut with strip after strip of very sticky tape! He wasnt satisfied there, however, and as Dahlia struggled feebly, he wrapped her lower face in layer after layer of vet wrap, further silencing the helpless girl! Still, he continued, adding several turns of duct tape around and around her head, ensuring NOTHING could slip out of place, and leaving her feeling like her head would pop from the pressure! Now silent and secured, the stranger pulled up her sports bra to reveal her giant all-natural breasts! Dahlia was worried, but that quickly turned to terror when he pulled out a pair of scissors and slowly approached her crotch! Two quick snips made a tiny hole in the fabric, and she shivered in revulsion and fear when his fingers reached into the opening and tore the crotch wide open, revealing her tight, young, shaved pussy!! She sobbed, cursing herself for not wearing panties that day as the stranger took out her favorite toy, a vibrating egg! Helpless, she watched as he lubed it up, slid a finger into her, and followed that with the toy!! He switched it on and she fought to keep from letting her body betray her, but her battle was doomed to fail when he took out a Doxy magic wand and began to her over as the egg buzzed away inside of her!! Humiliated and ashamed, she could not keep from cumming again and again, her moans muffled by the heavy gag, her eyes pleading with her captor to release her, but he showed no interest in letting her go. In fact, he tied the Doxy to the girl, securing it snugly to her sensitive vagina and left, making sure all the devices were turned up as high as they would go!! Dahlia thought she would lose her mind from the intense orgasms she was powerless to stop! One thought crossed her mind: how long could she take this torment, and who could possible save her?