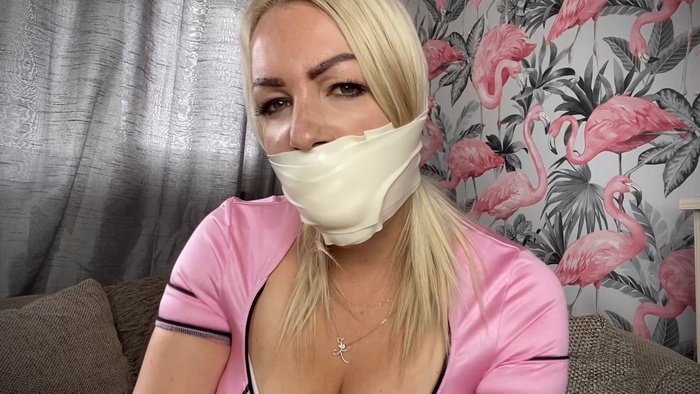 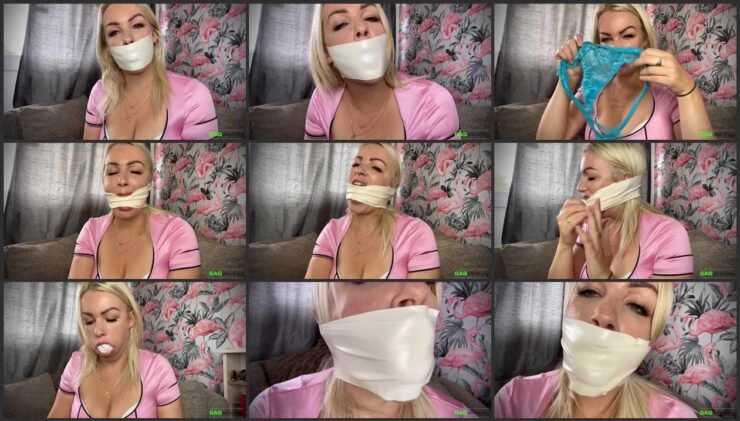 Gag 1
Penny is going to try out a new tape. She stuffs her mouth first with a tiny pair of panties so that she can still close her mouth. Penny closes her mouth and put her lips together like a kiss and puts one piece of 3″ Microfoam tape over it. Now it’s time to talk as much as she can trough the stuffed tape gag. She shows off the gag while moving her mouth and gag talking a lot. When Penny has talked enough for you she decides to pull off the tape and pull out the very wet panty.
Gag 2
Now it’s time for Penny’s second gag a Microfoam stuffed cleave gag. Penny first packs in a pair of big blue panties into her mouth so that she can barely close her mouth and wraps around the 3″ Microfoam tape as a cleave gag. Now that Penny is done with putting the gag on she starts gag talking. She works the gag a lot by moving her mouth over the gag and trying to push out the stuffing. All her effort is of no use she cannot get the stuffing out or the tightly wrapped around tape off..
Gag 3
It’s time for Penny’s last Microfoam tape gag. She tries to put in a HUGE pantie but it is not working out.. But she still gets a massive pantie stuffed into her mouth. Now she wraps the microfoam tape around as a tight wrap around gag. She tries to make as much as possible sounds trough the gag but all her efforts are futile you only hear MMMPPPHING trough it. She shows off how tight the tape is applied you can even see her lips trough the tape while gag talking for you. When she had enough she takes off the tape and pulls out the massive panty.

home / General / Self Gag Microfoam Tape with Penny. 3 Gag Video in one