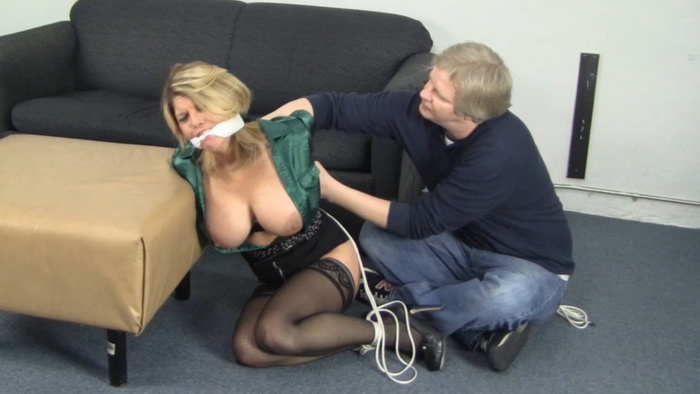 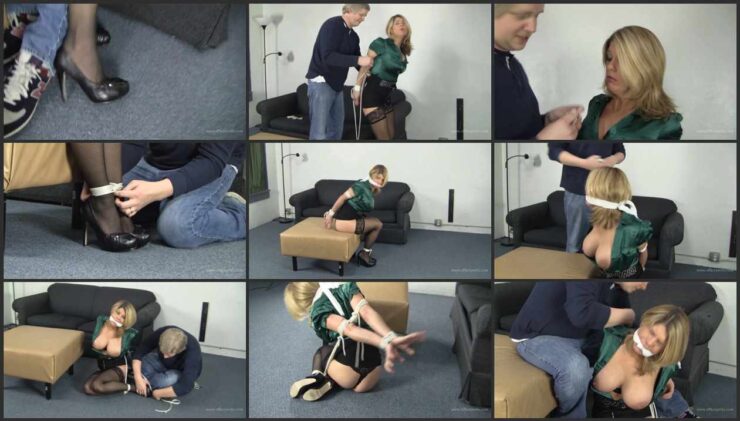 Carissa gets home from work in a very sexy green shiny shirt and very short black skirt. Suddenly a man walks in having followed her in directly behind and jumps on her causing her skirt to ride up and her black stockings tops to fall out. She pleads with him to take whatever he needs and he takes it literally which causes Carissa to rethink what she’s just offered the mystery man. He quickly wraps her wrists and gets them tied tightly behind her while she kicks her leg up in the air showing off her ass quite nicely. He moves her to a seated position on his lap and takes out another rope after which he stands her up and starts binding her elbows tightly together behind her back. Carissa winces in pain at her elbows being drawn together behind her back so sharply but he’s not interested in hearing her cries and continues with what he’s doing.

Her shirt strains over her massive tits as her arms are held tightly behind her. Carissa then has a cloth stuffed into her mouth which is then held in place by a white cleave. The man sits her down on the ottoman and starts binding her ankles tightly together. He tells her that he’s actually on the run at the moment and since it’s a weekend he’s found her so he can entertain himself a bit. Furthering his point he starts to unbutton her top and takes her bra down exposing her large breasts and fondling them a bit before he goes and takes a peek at what he might be able to steal from her house.

Left alone Carissa tries desperately to free herself from the tight ropes but can’t do much more than stand up and start trying to wiggle away before giving up on that and taking herself down to the floor to find some slack in the ropes. She does manage to get a bit of slack in the wrists before her captor comes back to let her know that he’s made some headway with her bank account.