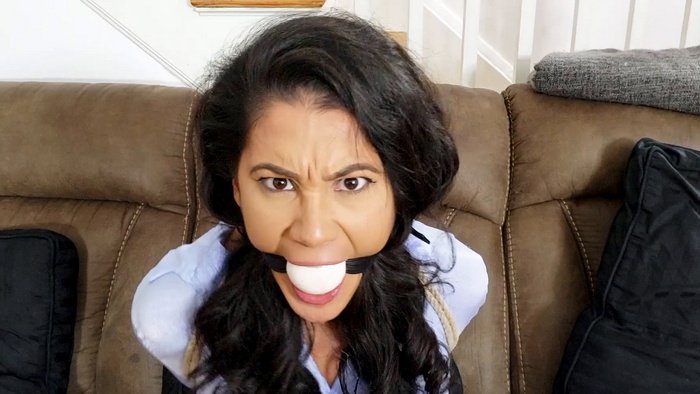 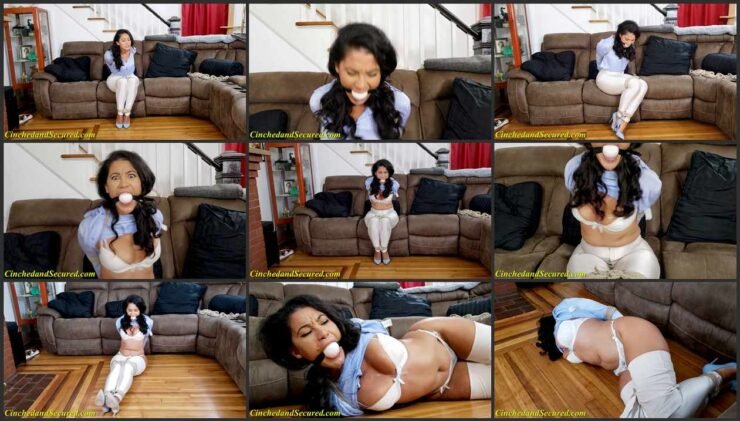 Sahrye thinks that as a domme, she’s queen of the roost. Of course, her haughty attitude doesn’t fly with everyone, like her local male counterpart who is determined to put the bitchy latina in her proper place once and for ll! Bound tightly on her sofa, she curses out her unseen assailant with a string of threats, insults and profanities that does nothing to help her plight in the least tiny bit. When the dom holds a huge ball gag up before Sahrye’s eyes, she defiantly warns him not to put that in her mouth, but in an instant, her mouth is completely filled with the large rubber sphere! It’s been strapped in so tightly that she immediately begins drooling, her anger fueled by humiliation at how easily she had been transformed into a bubbling, gurgling thing, no longer the feisty female so many clients had feared! Her attitude is in need of further adjustment, so her shirt is pulled up to reveal her big boobs straining against her bra as she struggles impotently in a rage! She never stops insulting her captor, who delights at seeing this once proud domme fight helplessly against the bonds that have her secured, her saliva pouring down her chin, over her chest and spattering on the floor! Finally, her pants are pulled down, exposing her thong, and the poor girl is hogtied like a calf in a rodeo! Sahrye goes ballistic in her escape attempts, the rope biting into her flesh, and as the exhaustion and pain become intolerable, she begins to plead with her captor for mercy. However, he’s much sterner in his disciplinary measures than she ever was, and she’s not getting out for a long time to come!