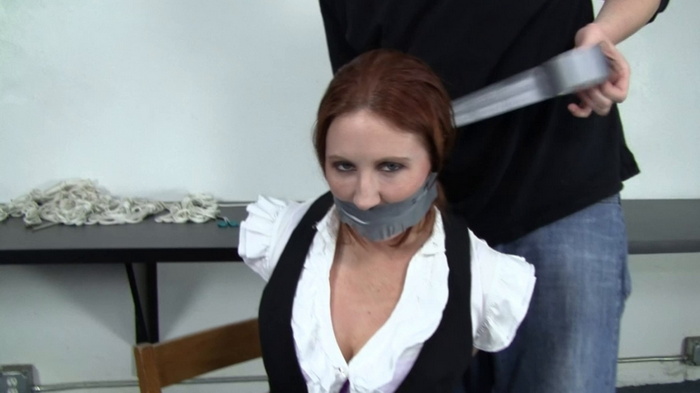 Sexy red head Shauna was nervous when she knocked on Mr. Big Boss’ door. She knew he had been really busy lately and she hoped her plan worked. The office workday had been a bad one and the only thing that could make it better was being tied up by the Boss. So she was going to walk into his office as if he called her in there and then she would work her magic.

Shauna strode into the Boss’ office once he told her to come in. She was wearing a tight pencil skirt, white blouse and black vest. She also had on white peep toe pumps. Shauna sat on the counter and started to discuss her day. The Boss looked confused when she told him he had asked to see her but didn’t dispute it. She continued on with her plan. She picked up a piece of the white rope that was sitting in front of the Boss and started to talk about how she wanted to be tied up by him. How she wanted some of his attention. It seemed like all the other secretaries were always in his office but never Shauna.

The Boss replied that he had some free time and was sure they could work something out. Shauna decided she needed to convince the Boss she really wanted to be tied up by him, so she stood up and took her green panties off. She then sat back on the counter, smiled seductively at the Boss and then shoved the panties in her mouth. She held them in there tight as she tore off a strip of duct tape. She placed the duct tape strip across her mouth and pushed it down tight against her face.