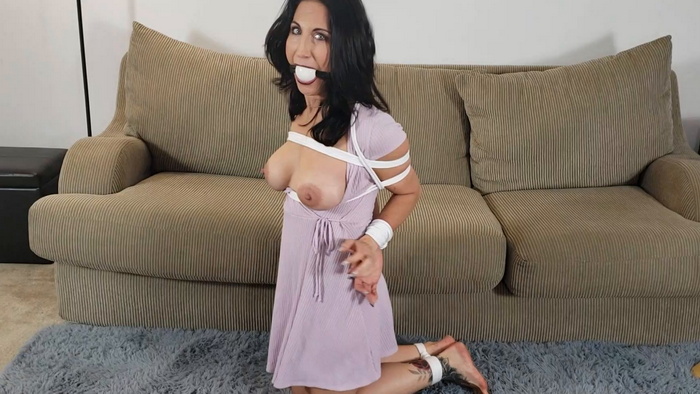 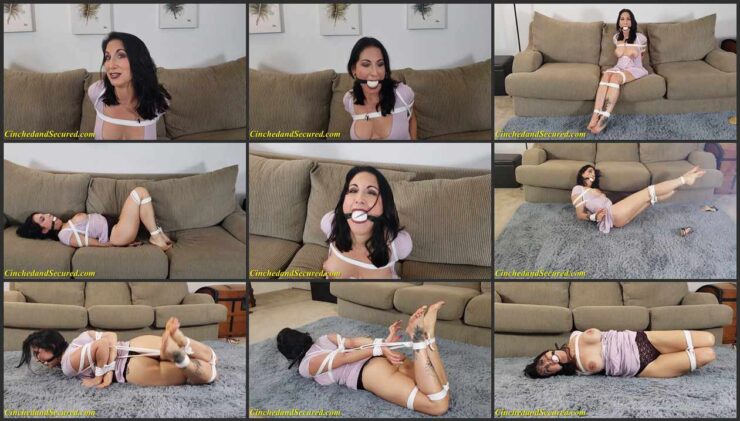 Raven looks absolutely stunning when she is bound, as you discovered when you snatched her off the street. Maybe it’s the way she struggles. Maybe it’s the way the ropes hug and accentuate every curve of her luscious body, especially those fabulous tits. Who could blame you for staring so hard at her as she squirms and grunts. She notices your lecherous stare, and she is certain she can convince you to untie her.

She talks directly to you, playing to your ego and your lust as she uses her wits to persuade you to untie her so she can escape. You don’t fall for it, and stuff a giant white ball gag into her mouth, strapping it in tightly. You are delighted and excited by her cries of surprise and they way they are cut off mid shout, only to be replaced by angry gag talk and even more furious struggling! She manages to make it to her feet and hop a bit before turning back to you and cursing you through the gag.

Realizing that her attitude won’t get her anywhere, she again resorts to sweet talk through her gag, but that only results in you pulling her tits out of her dress before pushing her back onto the couch! Now she is truly angry, and she is determined to get out, showing off her long legs, sexy feet and delicious ass as she writhes in fury. She manages to make it to the floor, spewing a stream of curses and angry gag gibberish as she demands release, but when you hold up even more rope, her eyes widen and she protests but it is no use! Left in a hogtie, she can only fume in fury, spewing more angry gag talk and drool as she pulls and tugs in a vain attempt at freeing herself. She’s all yours now, and she’s NEVER getting out!