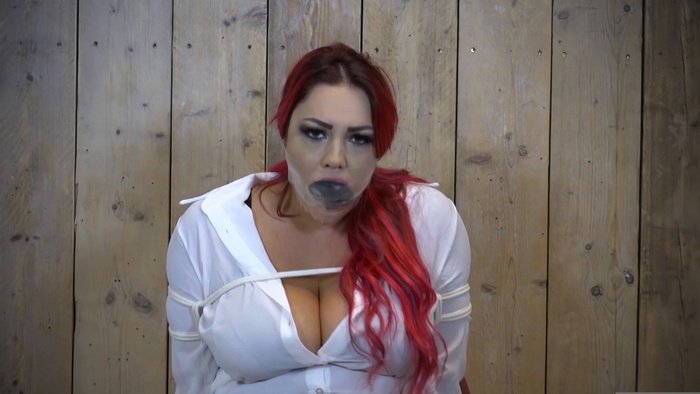 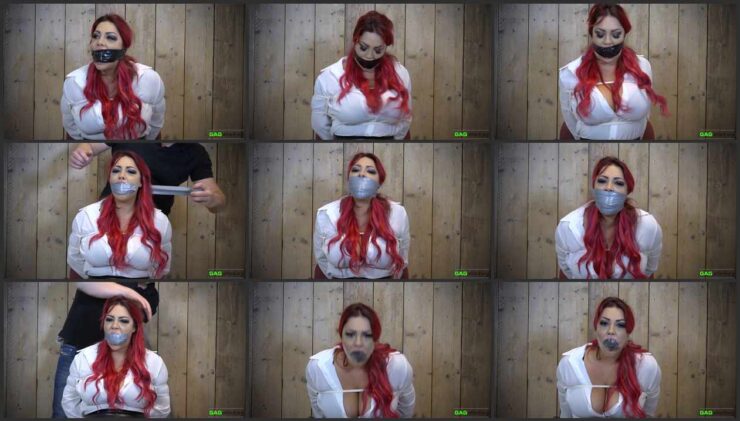 Gag 1
Rara is already tied onto the chair when the video starts. She gets 2 big black ankle socks stuffed inside of her mouth and the guy that captured her starts wrapping black PVC Tape around her head as a tight cleave gag. When the gag is finished she is left alone to struggle and gag talk as much as she can. Rara does her best to call for help trough the tight gag but all that is coming out of her mouth is loud MMMPPHING. She tries to yell at her capturer “let me go!” but all that is coming out of her heavily stuffed mouth is muffled gag talk… After a while the tight PVC tape is removed but she has to keeps in the already wet black ankle socks..
Gag 2
Now it’s time for Rara to get even more heavily gagged. There is glimmering silver PVC tape wrapped around her head multiple times as a very tight wrap around gag. This makes one of the most effective gags ever used on Rara all you can hear is loud MMMMMPPPHING without hearing anything the pretty captured damsel tries to say… She gets angry at her capturer and yells at him trough her very muffling gag. Rara demonstrated this gag pretty well with all the loud gag talk and MMMPPHING so her capturer takes the tape of but the very wet socks need to stay put.
Gag 3
It’s time for Rara her last gag. There is clear PVC Tape wrapped tightly around her head as a wrap around gag. Rara is left alone to scream and call to get this tight gag off as much as she wants. The gag makes it impossible to gag talk normal and the sounds that come out doesn’t make sense at all. Rara now furious about all those extreme tight gags tries to make as much sound as possible but her attempts are futile… The gag is taken off when her capturer thinks she has had enough.