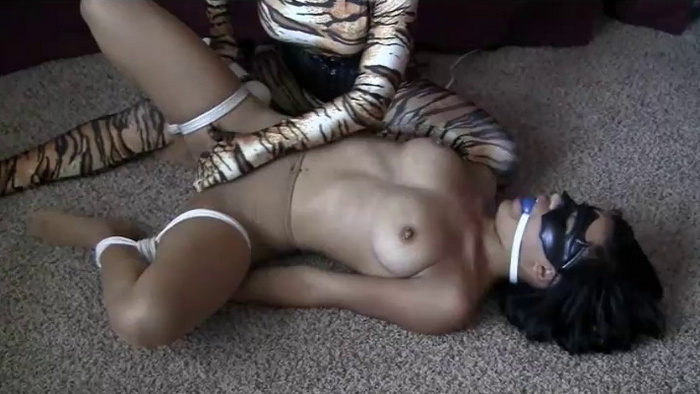 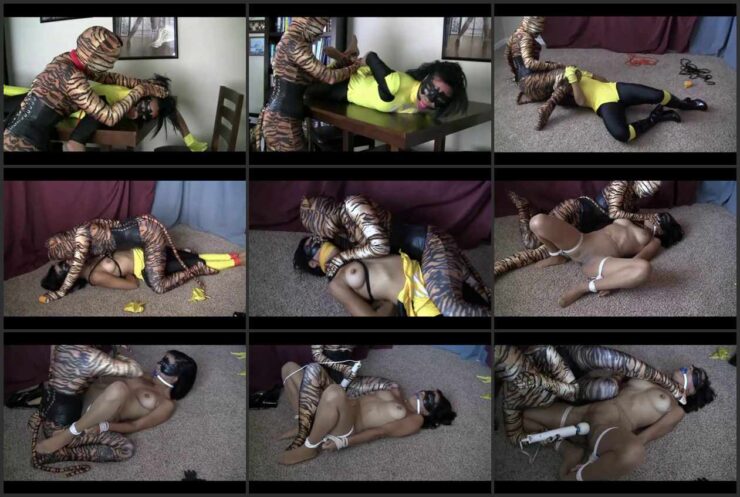 Magma managed to get herself loose. She looked around for where Mistress Tyger had ran off to. This new villain needs to be captured quickly. As Magma was searching, she never saw Mistress Tyger until it was too late! The super villain pounced on her form behind and delivered a vicious attack that was both powerful and fast. Mistress Tyger puts the mighty Magma down for the count in no time flat. Mistress Tyger was very pleased with herself even purring as she removes Magma’s boots , exposes her breasts and grabs her rope. She ties up poor Magma and gags her. Then the wily cat begins to run her paws all over Magma’s sexy body. Then after waking up and ultimately putting her back to rest, Mistress Tyger leaves her helpless captive bound and gagged on the floor.

Mistress Tyger, return’s sometime later and finds her captive still bound and gagged! Young Magma, is untied and stripped down to her pantyhose then retied! Her gag is replaced with a blue ball gaga. Now it was time for the real fun or humiliation depending upon whose side you are on. Magma is panicking as she awakens to find herself in her new predicament. Mistress Tyger crawls all over her bound victim. She then pulls out a hitachi and the real sexual torments begin. Using the evil toy Mistress Tyger brings poor Magma to several hard orgasms! Then she continues to rub her own cat like body of her sweaty, gasping captive. Then as one final insult to much injury already handed out, Mistress Tyger unmasks Magma! After a final round of verbal , Mistress Tyger leaves her bound, gagged and very humiliated super heroine victim.