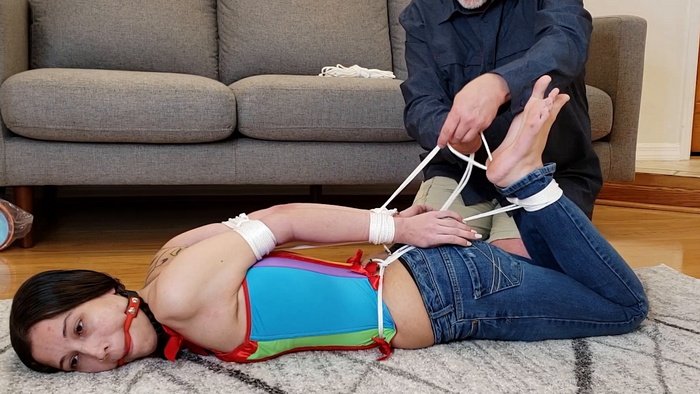 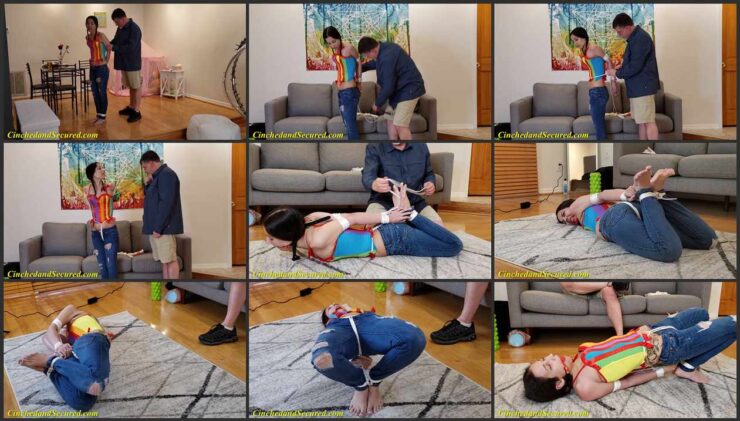 Garnet Rose is a seasoned escapologist. She has fired multiple assistants because no one has been able to tie her up tight enough and she has been able to escape all possible knots. However, today she’s interviewing a new man for the job, and she has high hopes. Things seem to be going well, as she tests his first bondage attempt. She has been bound with her hands behind her back and feet with thin ropes and cinched tight. She is hopping around the room testing her knots and for once, she’s not so confident that she will be able to escape her predicament. Still, she needs to know how he will do with more extreme ties, as her public expects her to be able to endure and escape from any tie. Up to the challenge, he picks the bound girl up and carries her into the next room. He lashed her elbows together, which secretly delighted Garnet. When he added a very snug crotch rope, she had a difficult time keeping from moaning. She did not want the potential new hire to see her enjoying herself that much! Devising a plan, she asks to be ball gagged tightly, and when the man straps the silencing rubber mass in, yanking it brutally, she knows she is in for a challenge! He hogties her tightly and leaves her on the floor. Garnet is barely able to move, but the feel of the ropes drives her mad with lust and she rubs on her crotch rope pleasuring herself, trying to orgasm on the floor, even though she knows the man is watching her every move and listening to every moan! She has already decided this man is getting the job, and she hopes he’ll be pleased at the “fringe benefits” she plans to offer!