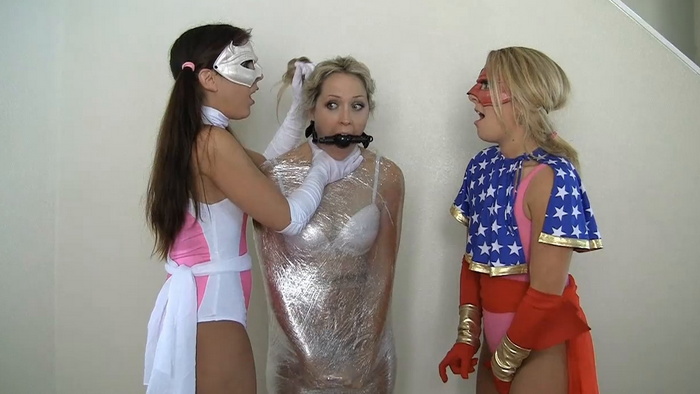 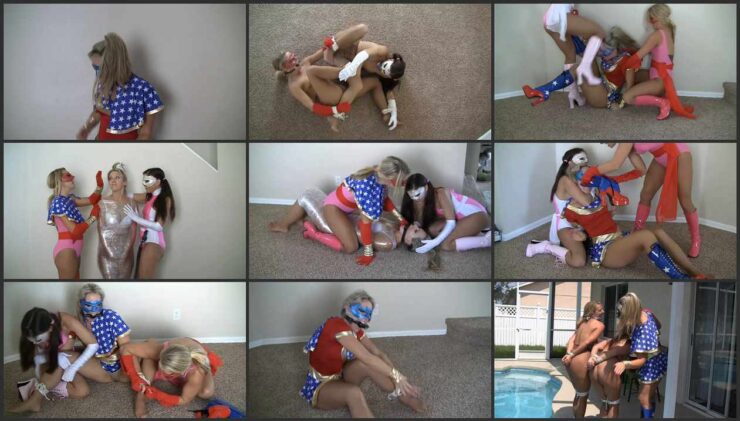 Starring Anna as Patriot Girl and as Venom Valentine, Annabelle Genovisi and Dre Hazel as Pink The mighty Patriot Girl, one of the League’s original heroines. She was fighting Red Dawn a few years ago and no one had picked up the mantle. Patriot Girl, one of the heroines blessed by the warriors of Sparta like her fellow heroines Americana, Liberty Belle, Lady Victory etc. had died defending the city of Tiedsville.

The two criminals seem most obviously insane. So as patriot Girl is walking back she is thinking about those two in the nut house, not prison. Walking back into the room she left the two in she is startled to see a pile of rope and nothing else. No villains, no costumes, just rope and gags. Patriot Girl had also failed to notice Venom and Pink had in fact not fled the scene but had hung around. The two crazies were lurking around waiting for the chance to attack. That chance came when the two leaped over the stairs and pounced on the surprised heroine.

She was able to quickly break loose. She got herself dressed and heard the two annoyingly crazy villains coming back. Patriot Girl hid so she could spring her own little trap. Venom and Pink walked back in and immediately noticed that Patriot Girl had escaped. The two started arguing about whose fault it was, then they promptly started to fight. Patriot Girl giggled to herself as she watched the two idiots as they fought each other on the floor.

Patriot Girl put the goofy little villain known as Pink (played by uber sexy Dre Hazel) down first then turned her attention to the boss. Venom Valentine, (played by the hot and sexy Annabelle Genovisi) was rolling around on the floor giggling when Patriot Girl punched her out. Now both psycho villains were out, quiet finally reined supreme. Patriot Girl grabbed both villains and dragged them outside (off screen). When next we see the trio again, Pink and Venom are bound and gagged stripped down to their pantyhose. Both were again giggling and babbling excessively.