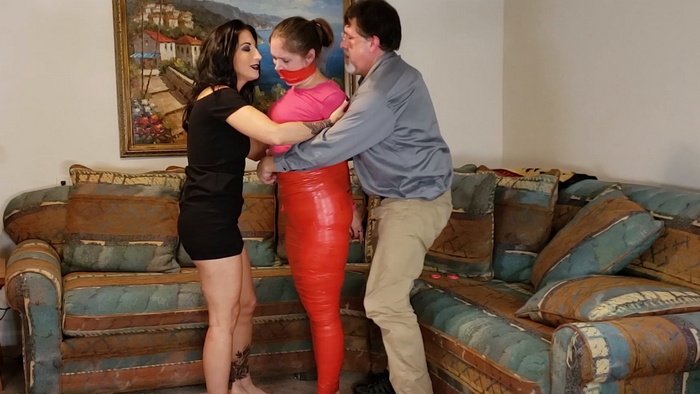 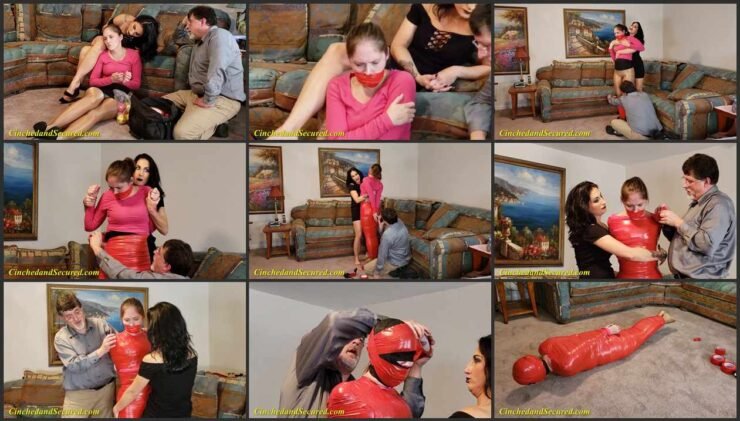 It’s really not hard to capture and snatch pretty, unsuspecting girls. raven and her partner have been doing it for a while now. They aren’t slavers or anything like that, just a kinky couple who truly enjoy tormenting unenthusiastic playthings, as Rachel Adams was about to learn first hand! Wrestled into the room, she was forced to pack her mouth with foam balls until her cheeks bulged and she threatened to retch from the massive obstruction. Worse, the weird couple made her wrap tight red electrical tape around her head again and again to seal the stifling silencers in her mouth! Then they forced her to her feet, and raven grabbed and held the struggling girl as her partner began to slowly wrap her body with yards of the same tape that had glued her mouth shut! As the tape slowly crept up her body from her feet inexorably skyward, trapping more and more of her flesh in the brutal cocoon, she was pawed and groped by Raven who told her of all the terrible things in store for her! Once her wrists were secured and her arms began to be swallowed up in the wrappings, Rachel knew she would never escape. She was left to try and endure the bone crushing bondage, her eyes wide with terror and the air filled with her grunts of pain and feeble, garbled pleas for mercy. Soon, her world went dark when the couple wrapped her head in snug vet wrap and then encased THAT in more of the evil tape before laying her on the ground, a sobbing, squirming object. But the worst was yet to come! When raven left the room, her partner informed Rachel that he was quite jealous of Raven’s lust for the girl, and he’d be back before morning to take care of her for good!