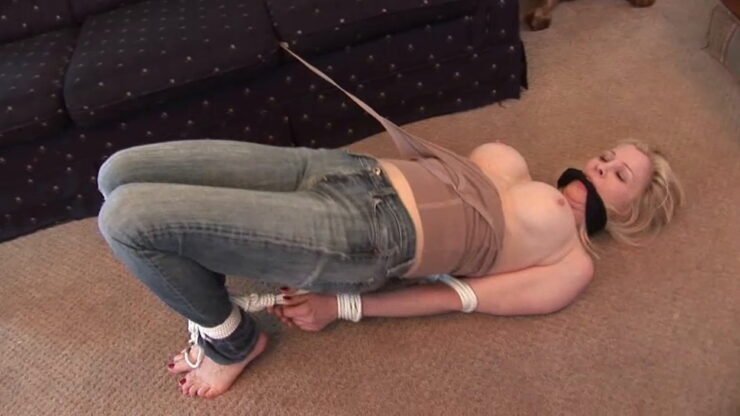 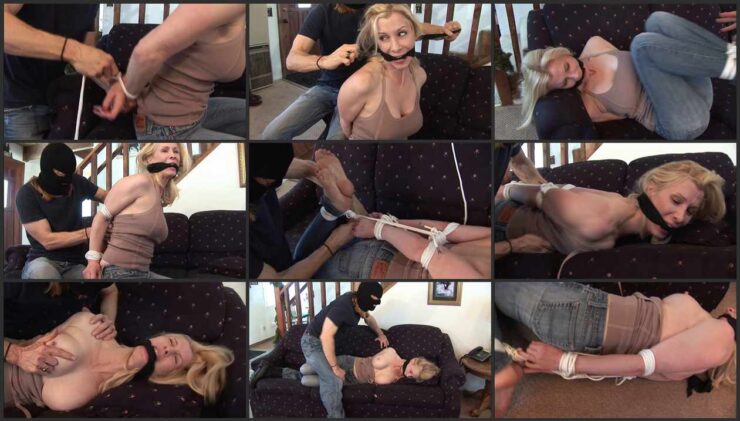 This bondage clip of Eden Wells getting hogtied and gagged by a masked intruder was done in a single shot, like the movie 1917. Unlike the move we didn’t cheat. The camera skills of Loren Chance were on full display. Our cast was slightly smaller than 1917’s, but the arousal factor is way higher. It begins with Eden on the sofa, in jeans, barefoot, curled up with a book. Behind her creeps in a masked man. She handgagged and ordered to cross her hands behind her. Her wrists are tightly bound. The intruder decides that she’s being a bit loud, so he pulls a thick, black scarf from his pocket and gets Eden tightly cleavegagged. Her bare feet are tied up, and the masked man goes for her elbows next, tying her up strictly. She’s forced onto her belly on the sofa, where her bare feet are tied to her elbow ropes. She’s hogtied! Now the intruder pull her top down and her big tits are a treat for the eyes! He’s here for the hidden safe and he will twist her nipples until he finds out where it is. He administers titty twisters and Eden squeals into her cleave gag until she can take no more. She gagtalks the location of the safe, and the intruder heads upstairs to see. Eden rolls off the sofa and onto the floor, mmphing through that gag and wriggling about. In her struggles we get the closeups of her soles and the ropework that binds her. She’s acting pretty desperate. Did she give him the wrongt location for the safe?