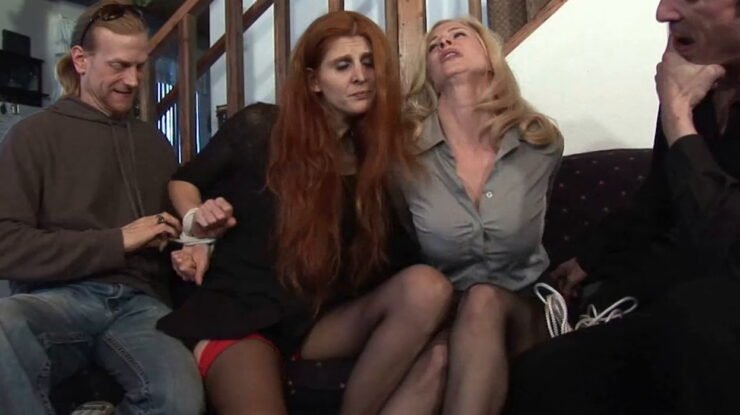 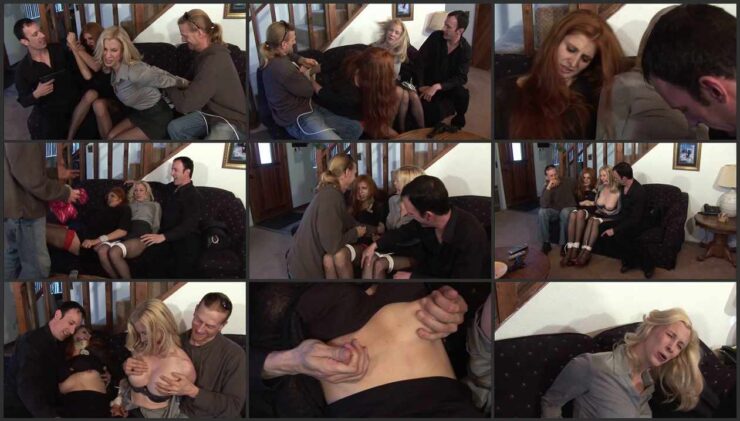 Two men, Isaac W. and Sergio, are looking for a house…or are they? Hot AF real estate agents Morganne Paris (redhead) and Eden Wells (blonde), dressed in sexy office wear, lead them into this modest bungalow, where the two ladies proceed to tell their two “buyers” about the amenities. While they’re not looking, Sergio whips out a gun and commands the two beautiful agents to do as he says. They’re forced onto a couch, and Sergio keeps that gun on both damsels as Isaac extracts rope from his backpack. He starts tying up Eden first, her hands bound behind her back. French belle Morganne gets the same treatment. With the both Eden and Morganne’s wrists tied up, Sergio now pitches in to help! They grab the agents’ kicking legs and heels, which gives us some great shots of Morganne’s thigh-high stockings and Eden’s cleavage almost popping right out of her blouse. But the two men hold on tight and soon our two damsels find their their thighs bound up tightly, with lots of touching by these two men of the ladies’ pantyhose-covered legs! Eden tries to fight Sergio off and yells out that she’ll see him in jail! The guys just laugh and set to roping up their ankles next, treating the viewer to lots of closeups of the two sexy real estate agent’s wriggling high heels! Next comes the gagging! Gotta keep them from screaming, and Eden’s futile threats are rather annoying to these two imposters. Sergio holds Eden’s head as Isaac applies a muffler — a tight, knotted scarf cleave gag. Mouthy Morganne gets the same and now both lovelies are bound and gagged together on the sofa. One more rope secures our two agents together at the elbows and upper arm. With the two hot ladies helpless in their bondage, Sergio dresses down poor Eden! She tries to cry out as her top is unbuttoned and her bra cups peeled back to expose her huge, gorgeous breasts! Next, Isaac strips Morganne topless, too, and both ladies are now in for some serious tit groping by both these men! These guys are having one hell of a good time fondling and playing with their two captives! They laugh as they tell their captives that they plan to call for pizza, then rob them blind, and maybe more! The two men switch places and fondle each girl’s breasts while Eden and Morganne squirm and struggle, pulling against their bonds, and moaning and mmpphing through their cleave gags! This 18:30 video Includes a fab collection of outtakes and bloopers at the end! Morganne’s french accent is simply delightful, especially through her gag!