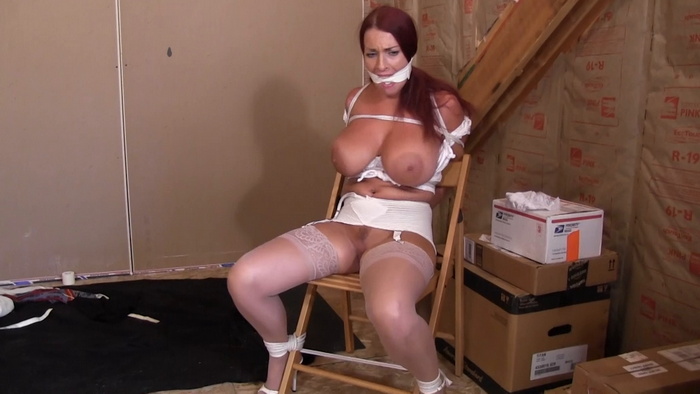 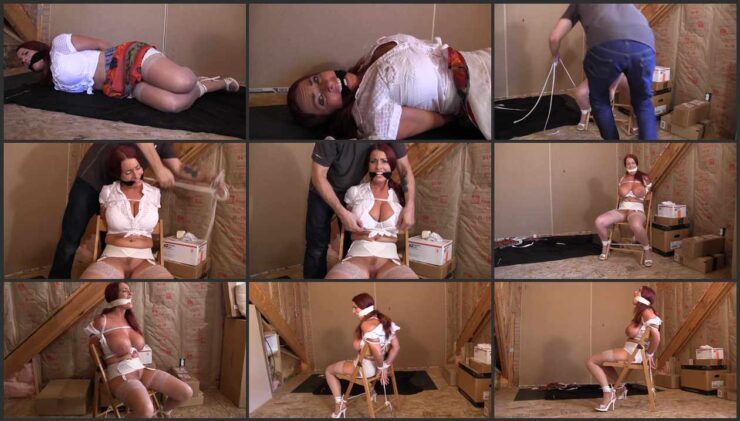 The vacant house down the street was their favorite place to hang out. It was their headquarters, their fort, and their hide out. But today when they went in, they found out is was someone Else’s hideout too. Because inside they found a woman named Goldie Blair struggling bound and gagged. The knots were too tight and they didn’t have the strength to untie her. Plus, as Goldie’s skirt moved up, they could see she was not wearing panties and this turned out to be a very big distraction since they had never seen Pussy before. They were however, able to pull the stuffing out of her mouth which turned out to be Goldie’s panties.

Able to talk somewhat, Goldie explain that she was the missing rich lady that they may have heard about on the news. She told them to run home and tell their parents what they found. So off they went. A short time later, the bad guy returned to find Goldie with her gag removed.. He untied her legs and lifted her onto a chair where he retied her with her legs apart. He then replaces the gag by re-stuffing her panties back in her mouth and then taping her. Once he had her completely tied down to the chair, the man opened her blouse and pulled her bra down. he then left her again to bounce around on the chair bound and gagged.

A short time later, her earlier visitors returned with bad news. Their parents were not home. But now they were really distracted as they stared in awe of her huge tits as she bounced them around. Somehow, they would save the day and figure out how to get Goldie untied. But for now, things had never been better in their favorite hang out as it now had a real live Damsel in Distress for them to rescue.