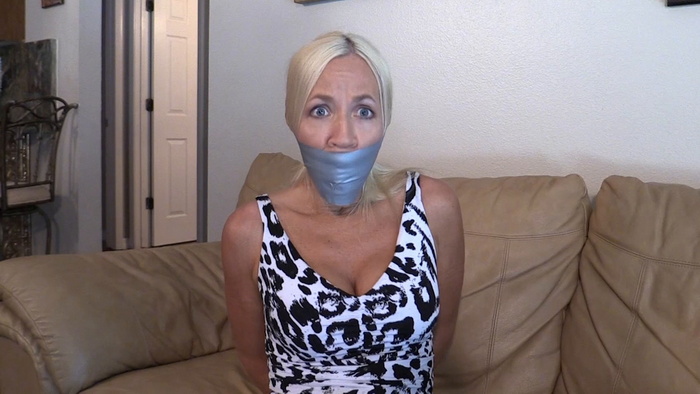 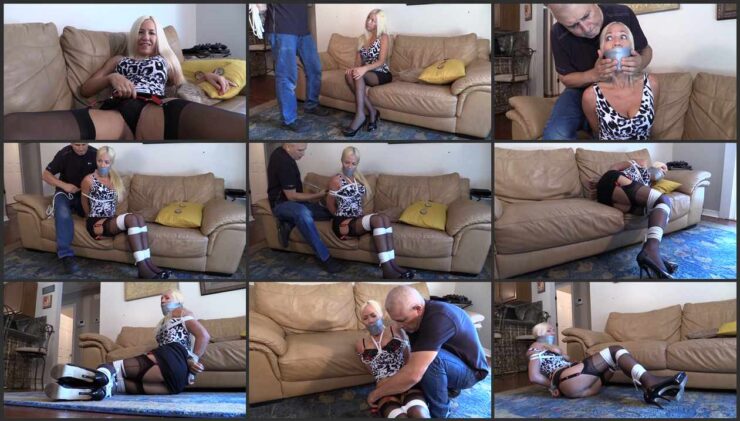 Amanda had a thing for younger men and was having an affair with the college boy who lived next door. But because this was causing his grades to fall off, the young man’s step-father didn’t like this situation. So as Amanda waited for the step-son to return, she heard someone walk in. But instead of the collage boy walking in, it was his step-father. “I thought I told you to stay away from my step-son!” the man told Amanda. But she told him that the boy was old enough to make his own decisions and that she would see him with or without the step-father’s permission. Expecting Amanda would not be cooperative, the man came prepared.

He grabbed her, brought out some rope and started to tie her up. Amanda tried to protest, but before she knew it, the man had her all trussed up. Then when it was obvious that she would not stay quiet, he stuffed and taped a pair of panties in her mouth to gag her. Amanda struggled bound and gagged on her sofa. Although the rope was tied painfully tight, she could not help but feel a little turned on.

Things got even more exciting when her pulled her boobs out of her bra and pulled off her skirt. Step-Dad wasn’t a college aged man, but Amanda was very open minded and being tied up like this had her very turned on. But the man had other ideas and decided it was time to leave. He locked up the place and left Amanda to struggle in her living room. Sometime later, the thought of his cougar neighbor bouncing her tits about as she struggled all tied up would test his will power and he would return. After all he couldn’t leave her like this all night long.

home / Bondage M/F / Amanda punished for having an affair with a neighbor boy. OSB2011