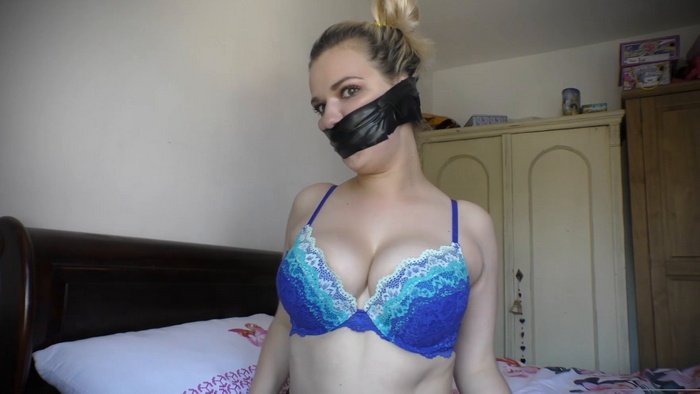 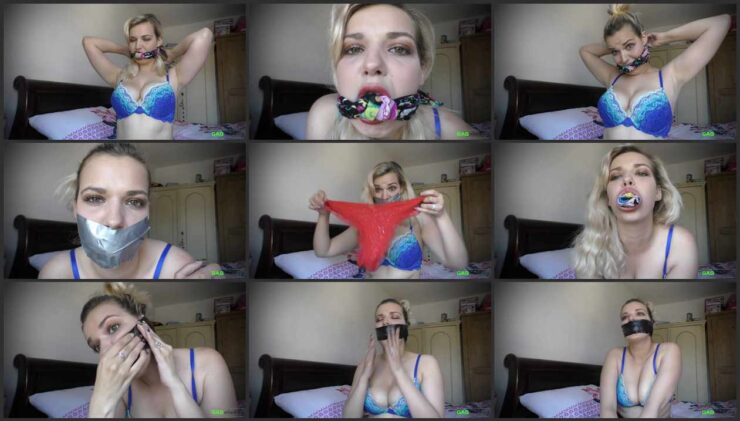 Gag 1
Dolly is going to gag herself specially for you. She first stuffs in a big sock and tightly wraps around thin green PVC tape. Even this doesn’t keep this girl quiet.. She Gag talks a lot trough her gag but it all sounds muffled. Expect loads of gag talk to and for you. She removes the gag but cant even find the end anymore so she uses a scissor. By doing this she pulls out a lot of hair…
Gag 2
For this self gag clip Dolly is going to use a gag she never used before. It seems to stick to itselfs so it’s safe to wrap around as a gag without ripping hairs out. She first puts in a sock and then uses the bandage wrap to tightly secure it in her mouth. She gag talks a lot while showing off her gag to you. When she showed you the gag from all sides she pulls off the wrap and spits out the sock.
Gag 3
Now it’s time for the biggest stuffing possible for poor Dolly.. She stuffs in a HUGE red panty and puts clear medical tape over it. Now it’s time for lots of gag talking and trying to push out the big stuffing. After a while Dolly decides to put on another layer of the clear medical tape to make it harder to push out. She gags talks a lot while trying to push out the HUGE red panty. After a while she almost succeeds but the only thing she can push loose is the top..

home / General / 3 self gag video in one. Dolly gags her mouth in different ways to herself especially for you