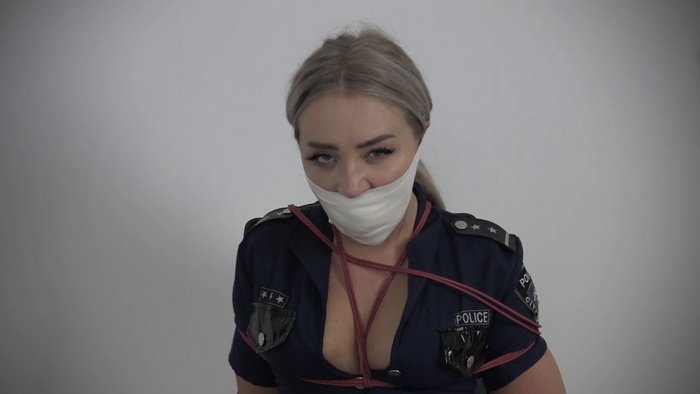 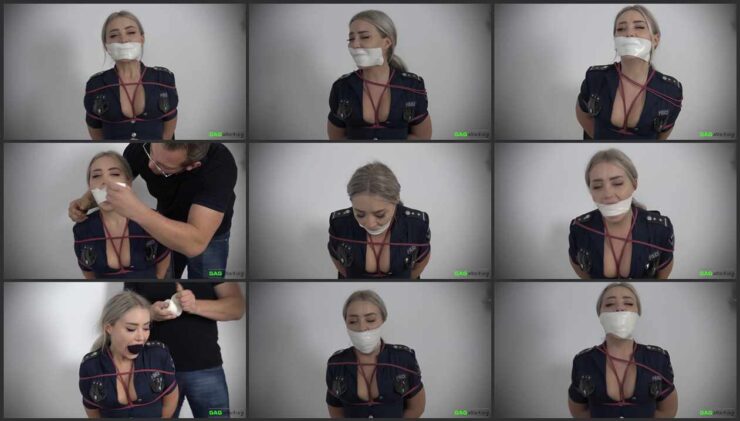 Gag 1
Aubrey is tied on a chair and is struggling to get out of her ties. Her capturer comes in and tells her that he has captured a real cop. She tells him not to take her but he doesn’t listen to her and gags her with one piece of 3″ Microfoam tape. Aubrey is left alone to struggle and struggling is what she really does. She tries to get the chest tie off while gag talking and MMMPPHING as a real Damsel in . Her attempts are getting the top rope a little higher but there is no chance she is getting these ropes more loosened..
Gag 2
Aubrey still tied on the chair is getting her second gag from her capturer. He takes off the piece of microfoam tape and stuffs in 2 big black ankle socks and wraps around 2″ microfoam tape as a tight cleave gag. Aubrey now still tied and gagged with a very tight and heavy stuffed gag tries to produce as much sound as possible but it’s of no use all that is coming out of her big mouth is MMMPPPHING. She tries to get out of the ropes again but her attempts are almost futile. Her gag is taken off for a new even more effective one..
Gag 3
Aubrey still captured and with no way of escaping out of the secure ties she is in She asks her capturer to let her go.. No way he is letting this one off without a third and final gag. He stuffs in two big ankle socks and wraps around 3″ Microfoam tape to keep them in nice and secure. She is now completely muffled and tries to produce sounds but it takes her a lot of effort to get the MMMPPHING out of the tight stuffed gag. Although there is no chance she gets out of these ropes and gag she tries hard.. Now her capturer has had his fun with her he releases her from the tight wrap around tape gag and the big stuffing.

home / Bondage M/F / 3 Gag Video with Aubrey, she is tied to a chair and gets three gags from her captor