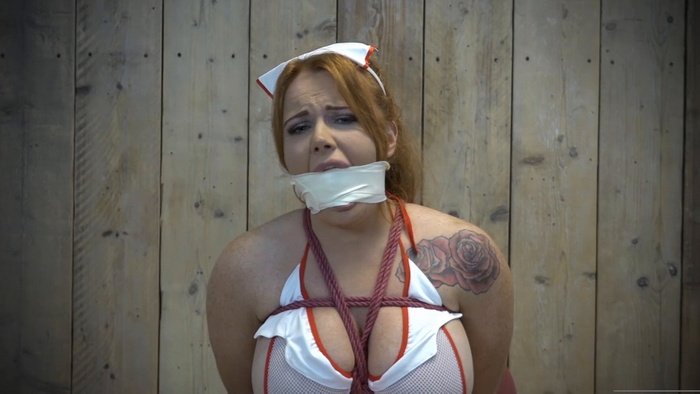 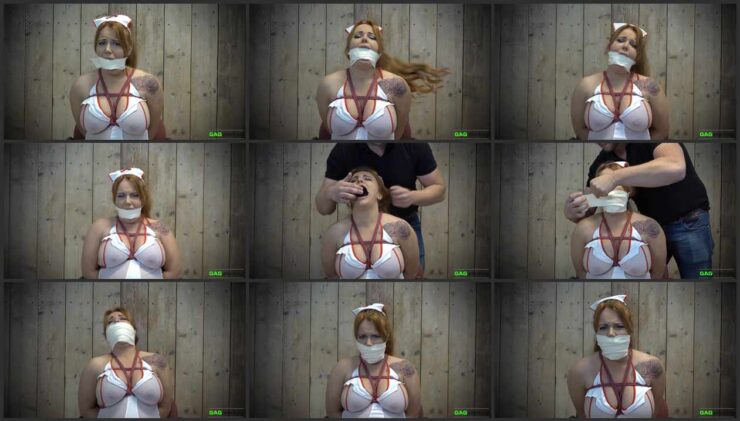 Gag 1
Lisa is already chest tied when her capturer comes in to gag her. He stuffs in two big white socks and wraps around 2″ Microfoam Tape a a very tight cleave gag. Lisa now tightly bound and gagged is left alone to struggle and do loads of gag talk. She is MMMMMPPPPHING a lot while trying to talk as much as she can. Lisa struggles to get out of the ties and get the stuffed socks out of her heavily gagged mouth.. But the socks are to deep in and the wrap around cleave gag prevents her from doing so. She gets angry at her capturer and tries to say that he has to let her go and take the gag off but all you can hear is muffled gag talk… After a while her severe gag is taken out and the socks are taken out of her mouth.
Gag 2
Now it’s time for this sexy nurse her second gag. There are two big black socks stuffed inside of her big mouth and 3″ Microfoam Tape Wrapped around to keep it all in. Lisa’s is left alone with her mouth now fully packed and wrapped and is Gag Talking a lot. She tries to talk as much as she can trough the heavy tape gag. Lisa confident she can get sounds out of her mouth that make sense does her best to do so. But the only thing that comes out of her heavily stuffed mouth is a lot of MMMMMMPPHING she gets angry at her capturer but she is not in control at this time.. After a while when her capturer thinks she had enough the heavy tape gag is taken off but she isn’t released from her bondage…