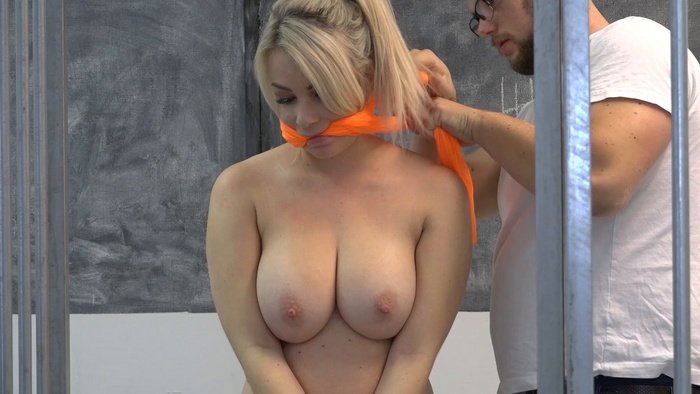 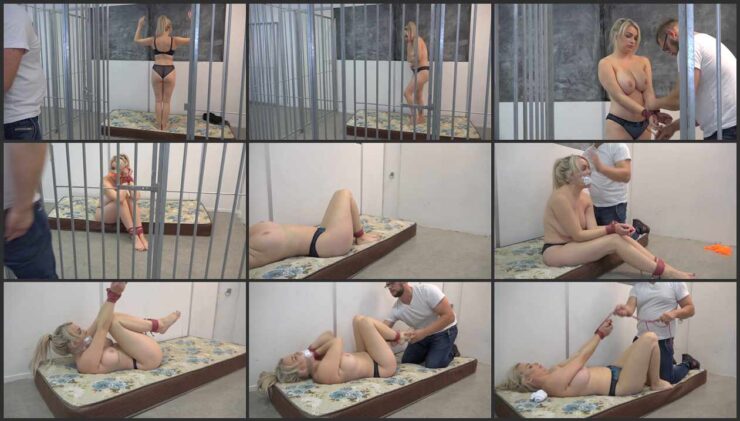 Penny is still imprisoned for shoplifting in the middle of nowhere.. The strange deputy Jeff returns..
He orders her to put her hands against the wall after that he wants her to put her hands up and behind her head. Then she needs to strip down till her lingerie and repeat the order he has given her before. Then he wants her to take off her bra. Penny complies to all of the deputy his orders because she knows there is no escaping & she doesn’t want to make things even worse.
The deputy enters the prison cell and starts tying penny’s hands in front and gags her with a orange cleave gag. Penny’s ankles are tied together and she is left in the prison cell by deputy Jeff.
Penny wants to struggle but she is very tired of all this and just wants it to end..
When deputy Jeff returns Penny is still in the ropes because she is very obedient to the deputy. Penny’s cleave gag is removed and replaced by a big white tennis sock with a wrap around clear tape gag. The deputy is very impressed by the obedient prisoner and leaves her to test out if she is going to escape.
Penny already gave up hope escaping a hour ago so she just squirms and makes a hopeless impression.
Now it’s time for deputy Jeff’s tickling “fun” it almost seems torture for Penny. He removes the clear tape and tells Penny to keep the sock in. Penny complies to his order and accepts the tickle torture. The deputy releases Penny from her ropes. When is the transport coming again?
When Jeff returns he tells Penny that the judge is going to punish her with a £50 fine.. Jeff very pleased with the obedient prisoner tells Penny he is going to pay the fine for her. Isn’t that nice……